This past 3rd of June 2022, our Ph.D. student Sascha Krakovka successfully defended his doctoral thesis work on the biology, resistance, and treatment of the parasite Giardia intestinalis. 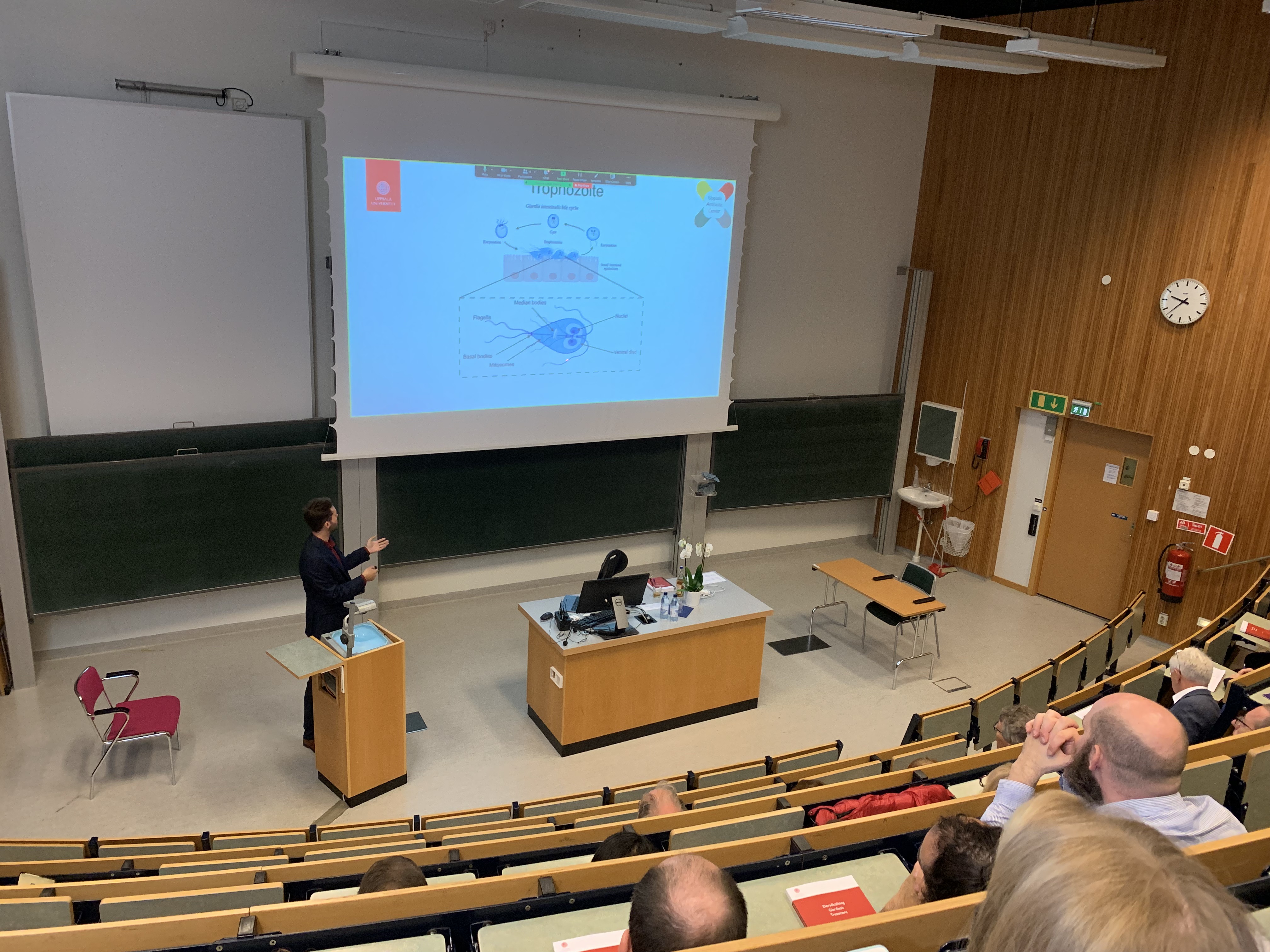 Giardiasis, the disease caused by the infectious parasite Giardia intestinalis, is currently one of the most common parasitic human diseases, affecting the developing world the most. The life cycle of this parasite consists of stable infectious cysts that can spread in the environment and proliferating trophozoites that replicate and cause disease in the host's intestine. The biology and molecular mechanisms involved in the formation of cysts -encystation- by the trophozoites have been difficult to study and understand.

To treat giardiasis, physicians mostly use metronidazole, a very useful and broad antimicrobial with a complex mechanism of action. The main hypothesis is that this drug type works by targeting DNA and other important cell molecules with radicals produced during the metabolism of metronidazole inside the parasite. Due to this complex and multi-target mechanism, the accumulation of resistance to metronidazole has been slow, but recently more and more resistant giardia strains have been identified. Thus, it is relevant now more than ever to understand how resistance to metronidazole develops, and look for new treatments.

With this background, Sascha's thesis aimed at enhancing the understanding of giardia encystation, elucidating the mechanism of action of metronidazole and the possible pathways for resistance, and investigating new potential giardiasis treatments.

In his first paper, Sasha applied high-resolution methods to learn about the encystation process, revealing that there is an increased differential gene expression throughout encystation, not only in the number of genes but also in which gene groups are expressed. The work was also able to determine that there are 3 stages to encystation, with clear and defined differences in gene expression.

For this second study, Sascha worked with several metronidazole-resistant giardia strains and one revertant (lost the resistance) and looked into their phenotypes, genes expressed, and proteins present in the different strains. The results show that the resistant strains are affected both in terms of how well they grow in the intestine, and how well they produce the infectious cysts. The detailed studies of gene and protein expression demonstrated that the mechanisms of metronidazole resistance affect drug uptake, drug activation inside the cell, reduced electron flow, increased cell oxygen concentration, and an upregulated oxygen stress response.

In his last thesis work, Sascha investigated the potential of a new target to treat giardiasis, the essential thymidine kinase which supplies thymidine for DNA synthesis. Here they were able to identify an already available drug, azidothymidine -AZT- (currently used to treat HIV infections) as a potential new giardia treatment. They showed both in vitro and in vivo that AZT can kill giardia, but also affect already formed trophozoites. AZT was successful at reducing both the duration of the infection and the symptoms. These are promising results as AZT is readily available, with a good safety profile, and a low cost.

We are very happy to see another of our first-round Ph.D. students successfully finish their doctoral work with great results and a wonderful defense.

Want to learn more about Dr. Wernroth's work? Check out these links: